Here’s what you need to know:

Stocks on Wall Street rose on Wednesday, as investors sized up a $2 trillion coronavirus rescue package intended to shore up the American economy.

The S&P 500 dipped in early trading before pushing higher, ending the trading day up more than 3 percent.

Some of the companies expected to benefit from government help led the gains. Boeing was up nearly 30 percent, helping lift the Dow Jones industrial average by more than 5 percent; American Airlines jumped more than 13 percent and Carnival Corporation jumped more than 21 percent.

Wednesday’s rally followed one of the best days for stocks on Wall Street since 2008 .

Governments elsewhere are also laying out plans to help. On Monday, Germany prepared an emergency budget and rescue fund for companies that includes state-supported loans. European Union leaders are working on additional measures to help loosen up money for some countries to help soften the economic blow of the virus.

Investors have welcomed the plans, but few are willing to conclusively say that the worst of the market sell-off is over.

In the United States, widespread social distancing measures put in place to control the spread of the coronavirus have hammered consumer spending, the heart of the American economy.

Economists are expecting almost unthinkable declines in the gross domestic product in the second quarter. Analysts at Capital Economics said on Wednesday that they expected U.S. growth to fall 40 percent in the second quarter at an annualized pace, as the unemployment rate jumps to 12 percent, higher than its 10 percent peak in 2009.

Airlines got the bailout they asked for. 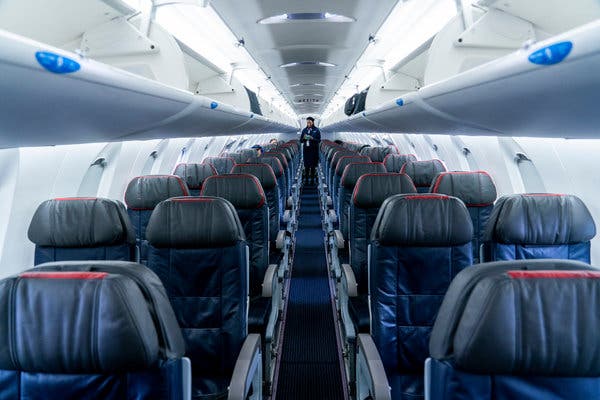 The airline industry is poised to receive an enormous bailout as part of the stimulus bill, a draft of which sets aside around $30 billion to pay employees of passenger and cargo employees. It also provides loans to passenger and cargo carriers in addition to some tax relief.

In exchange for the aid, airlines are prohibited from stock buybacks and dividends until a year after the loan is repaid. They must also maintain current staffing levels through September.

THE CONTEXT In recent weeks, the outlook for the global aviation business has soured significantly, with major carriers like American Airlines fighting for survival and United Airlines eliminating virtually all of its international flights for April. During that time, airline executives and industry groups had been lobbying the White House and members of Congress for aid.

The provisions almost exactly mirror what the industry lobbying group, Airlines for America, said would be necessary to stave off devastation of the industry.

THE RESPONSE As executives and union officials pored over the details of the stimulus deal on Wednesday morning, Sara Nelson, the influential president of the Association of Flight Attendants union, claimed victory.

A $2 trillion lifeline will help, but more may be needed.

If you want to shut down an economy to fight a pandemic without driving millions of people and businesses into bankruptcy, you need the government to cut some checks. The coronavirus response deal that congressional leaders struck early Wednesday will get a lot of checks in the mail, but those checks will soothe financial pain for only a few months.

The legislation, which is expected to be enacted within days, is the biggest fiscal stimulus package in modern American history, and more than double the size of the roughly $800 billion stimulus package that Congress passed in 2009, during the last recession.

Among the items in the bill are:

The hotel industry has taken a particularly damaging hit from the coronavirus pandemic devastating the American economy.

As many as four million hotel employees — housekeepers, maintenance workers, desk clerks and others — have been laid off or will be let go in coming weeks, according to the American Hotel and Lodging Association. And the industry has asked for a $150 billion bailout.

The industry is particularly concerned about the roughly $350 billion in mortgages, construction loans and commercial and industrial loans taken out on hotels and held by banks, insurance companies and investors. Much of that debt was borrowed by individual franchisees who have taken out mortgages on the hotels they own, rather than by major chains like Marriott International and Hilton Hotels & Resort.

Vinay Patel is one of those anxious borrowers. In recent days, the occupancy rates at the nine hotels he owns in the Northern Virginia area have plummeted from about 50 percent to only a handful of rooms each night.

“It’s just gut-wrenching,” Mr. Patel said. “I’ve reached out to my lenders saying, ‘We have to work through this together.’”

President Trump is a ratings hit, and some journalists and public health experts say that could be a dangerous thing.

Since reviving the daily White House briefing — a practice abandoned last year by an administration that bristles at outside scrutiny — Mr. Trump and his coronavirus updates have attracted an average audience of 8.5 million on CNN, Fox News, and MSNBC, roughly the viewership of the season finale of “The Bachelor.” On Monday, nearly 12.2 million people watched Mr. Trump’s briefing on cable news, according to Nielsen — “Monday Night Football” numbers.

And the audience is expanding even as Mr. Trump has repeatedly delivered information that doctors and public health officials have called ill-informed, misleading or downright wrong.

The veteran anchor Ted Koppel said on Wednesday that television news executives had forgotten a crucial distinction of their profession. “Training a camera on a live event, and just letting it play out, is technology, not journalism; journalism requires editing and context,” he wrote in an email.

A sticking point: Who oversees all that spending?

The final bill is expected to include the appointment of a new special inspector general to oversee the disbursement of funds to companies and ensure they qualify, according to a congressional aide.

The legislation would also create a five-person oversight panel, chosen by congressional leaders, and Treasury Secretary Steven Mnuchin would be required to make regular appearances before Congress to discuss the bailout package and how it was being carried out.

Those guardrails are similar to what lawmakers put in place for the Troubled Asset Relief Program, the $700 billion bank bailout that Congress passed during the 2008 financial crisis.

How should economic costs be weighed against saving lives?

Government agencies calculate these trade-offs regularly. The Environmental Protection Agency has established a cost of about $9.5 million per life saved as a benchmark for determining whether to clean up a toxic-waste site.

In a paper this week, three economists tried to calculate the optimal way to slow the spread of the coronavirus without economic costs that exceed the benefits.

In one set of assumptions — leaving it to individuals to decide whether to isolate themselves — the authors say that about 1.7 million people in the United States would die within a year and that consumer demand would decline by $800 billion in 2020, or about 5.5 percent.

They say that under an alternative approach — involving tighter restrictions on movement and commerce — the decline in consumption in 2020 more than doubles, to $1.8 trillion, but deaths drop by half a million. The difference amounts to $2 million in lost economic activity per life saved.

They are scrounging for fabric, cutting it up, stitching it together. They are repurposing drapes, dresses, bra straps, shower curtains, even coffee filters. They are building supply chains, organizing workers, managing distribution networks.

Most of all, they are sewing.

All over the country, homebound Americans are crafting thousands upon thousands of face masks to help shield doctors, nurses and many others from the coronavirus.

At the White House’s urging, manufacturing companies are beginning to ramp up their production of masks. But it could be weeks before the new supplies start rolling off the assembly lines.

In the meantime, some of the void is being filled by legions of sewers, called to duty in a matter of days via social media and word of mouth, their skills no longer taken for granted or dismissed as a mere hobby. They are making masks for America, much as a previous generation manufactured ammunition and tended “victory gardens” during World War II.

More than 1,200 health care workers have used a private online document to share their stories of fighting the coronavirus pandemic on the front lines.

In their accounts, they say the outbreak has turned American hospitals into “war zones.” They talk about being scared to go to work and anxious that they will become infected. They describe managers who seem to not care about their plight.

The document was created on March 19 by Sonja Schwartzbach, a nurse in New Jersey who is studying as a doctoral student. She said she started compiling the accounts after she determined that hospital conditions were “far worse” than most people realized and that her fellow health care workers needed a place to share what they were seeing.

Medicare is updating coverage for the coronavirus crisis.

Older Americans are at a high risk for serious illness from the coronavirus, and most who are over age 65 are covered by Medicare.

Medicare already covers its enrollees for much of what they might need if they contract the virus and become seriously ill — and it has expanded some services and loosened some rules in response to the crisis. Read more on how navigate Medicare right now.

Ask us your money questions at this difficult time. If you have questions or ideas, write to hubforhelp@nytimes.com and Ron Lieber, Tara Siegel Bernard and our personal finance team will read every message.

Here’s what else is happening: